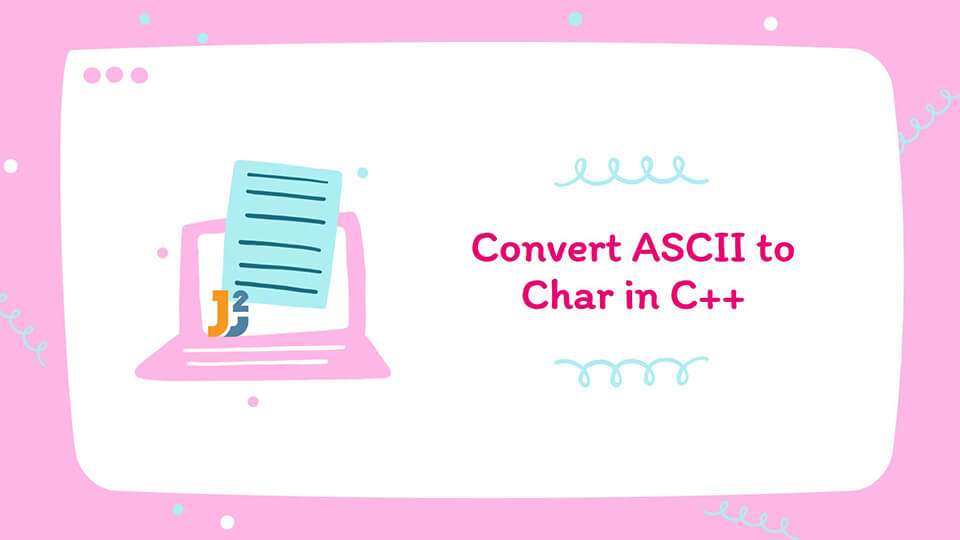 How to Convert ASCII values to Char in C++?

In C++, we represent characters using ASCII codes. However, the internal ASCII codes are not visible when we store characters into char data type instead we see the character itself.

We can convert the ASCII value to a character in C++ using multiple ways. We will discuss each of these ways one by one in this article.

Further, we will understand how each method works and we will learn to use each of the above methods in our code.

The following code demonstrates how we can use the char() function cast to convert an integer to a character.

The output of the above code is given as follows.

You can see that the output is very much what we expect for the input we have given to the code. You should take note that when we provide an integer that does not have a character corresponding to it a garbage value is printed. We can see this in our last output.

We have already seen above that function style char() cast can convert an ASCII value to the corresponding integer. But it is not the only method that C++ provides us. C++ also supports old C-style casts that you might be familiar with. In this method, we simply take an integer and cast it to the char type explicitly using the char keyword. After that, we assign the character to a variable of type char. In this way, we can convert our ASCII value to its corresponding character in C++ as shown below.

The output of the code is given below. You can see the output is the same as the output in the previous approach.

As we can see that last output is a garbage character because it corresponds to a value for which character does not exist.

Remove Character from String in C++

Convert ASCII to Char in C++ Using the Assignment Operator

We have already seen two ways to convert the ASCII value to its corresponding character. Those two ways are very similar but we are going to see a very simple and equally efficient way to do the same task.

The output of the above code is given below.

The output of the code is the same as the outputs in the previous approaches. It is because we have given the same input. It shows that this method works well and converts the ASCII integer value to the corresponding character in C++.

After execution of the sprintf() function, the corresponding char value for the input ASCII value will be assigned to the character variable that has been used as the first input argument.

The following code shows how we can use the sprintf() function in C++ to convert ASCII value to char.

The output of the code given above is given below. You can see the output is the same and perfect as our given input.

You should take note of the fact that the sprintf() function is used to format the strings and characters and we, therefore, make use of this smartly. It is not exclusively provided for converting the ASCII integer value to its corresponding character.

C++ is a popular and powerful programming language that is used worldwide for multiple applications. We can find it being used in embedded systems, the gaming industry, networking applications, etc. And the language does justice with its popularity by providing us tools and techniques to handle all the needs for programming.

In this article, we have witnessed one such useful application of C++ where we can convert an ASCII integer value to its corresponding character in different ways. We have talked about four different ways which are easy and efficient to perform the operation. This operation seems to be simple but it is a widely used and useful operation and we need it frequently when working with characters.