Home
struts 2
Introduction to Struts 2
Next

This tutorial is designed for Java programmers who need to understand the Struts 2.x framework and its application.

Before proceeding with this tutorial you should have a good understanding of the Java programming language. A basic understanding of MVC Framework and JSP or Servlet is very helpful.
This is 1 of 8 parts of tutorial series

Apache Struts 2 is an elegant, extensible framework for creating enterprise-ready Java web applications. The framework is designed to streamline the full development cycle, from building, to deploying, to maintaining applications over time.

Apache Struts2 was originally known as WebWork 2. After working independently for several years, the WebWork and Struts communities joined forces to create Struts2. This new version of Struts is simpler to use and closer to how Struts was always meant to be.
Struts 2 is a pull-MVC framework. i.e. the data that is to be displayed to user has to be pulled from the Action.

Struts2 supports annotation based configurations which are easy to create and more intuitive. Action class in Struts 2 act as the model in the web application. Unlike Struts 1.X, Struts 2 Action class are plain POJO objects, thus simplifying the testing of the code. Struts2 also comes with power APIs to configure Interceptors that reduce greatly the coupling in application. The view part of Struts 2 is highly configurable and it supports different result-types such as Velocity, FreeMarker, JSP, etc.

Above diagram describes modules in struts 2 .There are 5 modules: 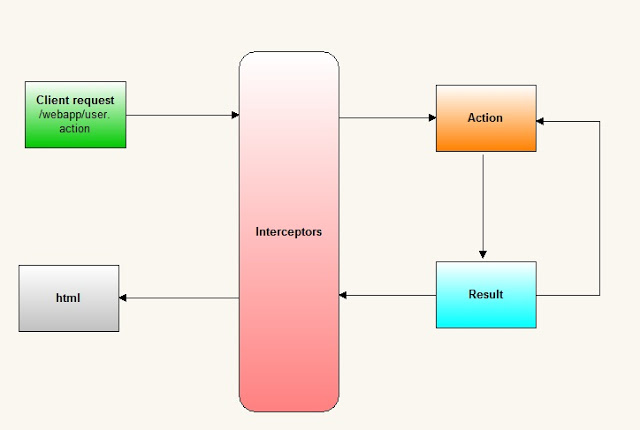