This is 5 of 8 part of struts 2 tutorial.In this post,We will learn about interceptors and creating our own interceptor.

Interceptor is an object which intercepts an action dynamically. It executed before and after the action execution. It Allows the developers to write a code which can execute and after the action. It executed before and after the code. It can prevent an action before executing.
Features like double-submit guards, type conversion, object population, validation, file upload, page preparation, and more, are all implemented with the help of Interceptors. Each and every Interceptor is pluggable, so you can decide exactly which features an Action needs to support. 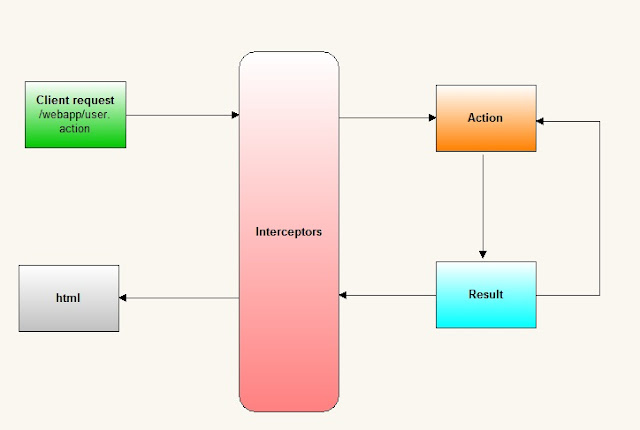 As we have seen request workflow in Introduction to struts2 part.

Struts2 comes with default list of Interceptors already configured in the application in struts-default.xml file. We can create our own custom Interceptors and plugin into a Struts2 based web application.Now Internal workflow is:

We will create two interceptor class and one action class to show workflow . We will  also learn how to declare intercpetor and also to do mapping between interceptor and action in struts.xml.

We will see more about this later.

We have seen in previous tutorial that struts.xml defines mapping between request to corresponding action.
How to declare interceptor in Struts.xml:
In tag in struts.xml, we can declare all our interceptors in tag.
For attaching interceptors to action,we can use under tag

so now we will declare two above interceptors in struts.xml

We will create one action class named DummyAction.java under src.Action class will be same as created in previous tutorials.

Create one jsp named “ForCallingAction.jsp” in Webcontent.We are creating this jsp just to call action.We will create a button.On clicking of that button an action “Dummy” will be called.

Create another jsp named “Welcome.jsp” As In DummyAction class,execute returns “success” so we will be directed to this page.

Web.xml will be same as previous tutorials except that we will change welcomeFile to “ForCallingAction.jsp”
Copy following code into web.xml

right click on project->run as->run on server
copy resultant url to browser.We will get following page. 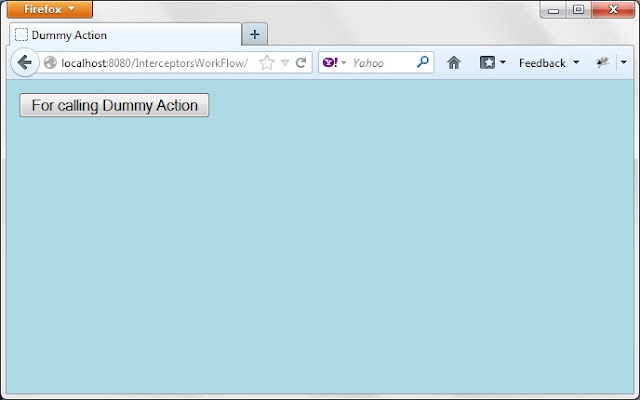 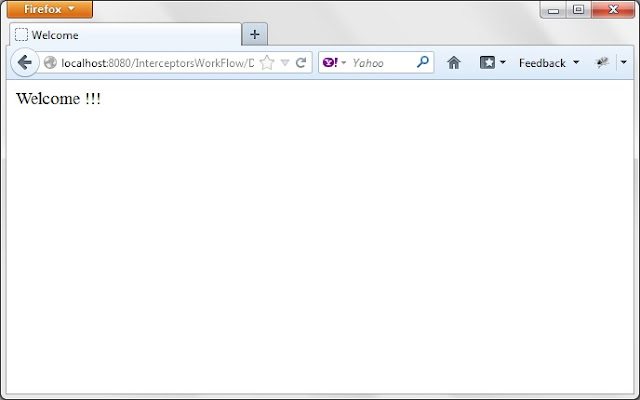 We got welcome page here but we are more interested in how interceptors worked.So when we will see our console we will get something like this

This call is key to call next interceptor  defined in the stack or of this is the last it will call the desired function in action class.

For the first interceptor,the invoke() method is called by the ActionProxy object.
so in our example

Now in next post,we will learn how to upload file on server in struts 2