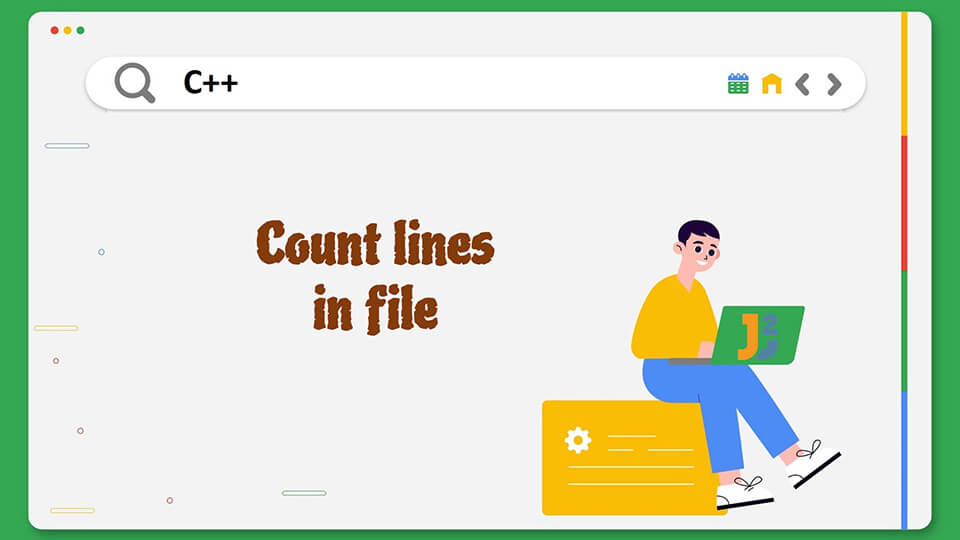 To count the lines in a file in c++, we will open the file in the read mode only as there are no output operations needed. Once the file is open we will read the file line by line using the getline() function and count the number of lines. The getline() function takes a file stream as its first argument and a string variable as its second argument. Upon execution, it reads the next line in the file stream into the string variable. After that, it advances the file pointer.

Before writing the program, let us see how a text file looks internally. It will help us to understand how our program works.

You can observe that after each line, a newline character (\n) has been inserted automatically. At the end of the text file, there is an end of file indicator (EOF). In our program, we will read the file line by line until we reach the end of file or EOF.

To check whether we have reached EOF or not, we will use the peek() method. Just as we peek into something to get any info about what’s happening without letting someone know about it, the peek() method, when invoked on a file stream, reads the next character without advancing the file pointer. Once the peek() method reads the EOF character, we will stop counting the number of lines in the file.

C++ Program To Count Lines In A File

Let us now implement a C++ program to read the file and count the number of lines in it using the getline() function and peek() method in C++.

The output of the above program is given below.

How To Count Lines In A File In C++ Using C-style Approach?

There is an alternative way to count the number of lines in a file in C++. We can use C-style file handling to read the file and count the number of lines in it. For this, we can open a file using the fopen() method and store the file pointer to a FILE pointer object. The fopen() method accepts two arguments, the first argument is a character array denoting the filename and the second argument is the parameter indicating the mode of opening the file. We will open the file in read-only mode.

In the end, we break from the loop when the end of file (EOF) character is found. We will use the same file used above for counting the number of lines.

Let us now implement a program using the getc() function to count the number of lines in a file in C++.

The output of the above program is given below.

Please be aware that the program reads the number of lines from the file and if there are empty lines (caused by empty enter pressing), then those lines will be counted as well.

Files are a necessary part of data storage and multiple types of data are stored in files for persistent storage. We often come across applications to read lines in files. In this article, we have understood how to read the files and count the number of lines in file in C++ using two ways.

That’s all about how to count lines in C++.